Explaining Canadian oil and gas: From where do emissions come? Where are they going? 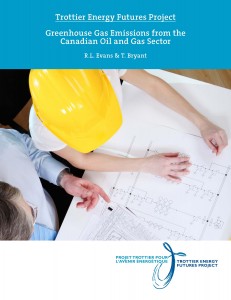 It could be said that in 2013 Canada was defined by its oil and gas sector. In a year highlighted by climate change activism, infrastructure and pipelines, economic growth, interprovincial relations and relations to the U.S. and now Asia, the fossil fuel industry was always in the news. With all the discussion and arguments around diluted bitumen, liquefied natural gas, carbon, greenhouse gases, exports and pipeline capacity it’s easy to lose track of just what we’re discussing and why it matters. How much dilbit (diluted bitumen) are we producing? How much do we import and export? What are the greenhouse gases from all this activity? As a primer, the David Suzuki Foundation and the Canadian Academy of Engineering decided to take stock of the oil and gas sector’s development over the past 35 years and describe how it has changed and why those changes are important.

We broke Canadian oil and gas production into three main categories: natural gas, conventional oil and oil sands products. Natural gas production more than doubled from 1978 until the mid-2000s, with increases in production stimulated by exports to the U.S. Greenhouse gas emissions (GHG) from natural gas extraction, processing and fugitive emissions increased from 28 million tonnes in 1978 to 71 million by 2007.

Canadian oil production tells another story. Conventional gas production has been in decline for the past 10 years but that of oil has continued unabated. Obviously this highlights the impact of the huge growth in oil sands’ production.

For surface mining, the raw oil sand is extracted and transported to upgrading facilities. The bitumen is then separated from the sand using crushers, hot water and steam, and then upgraded to synthetic crude oil using hydrogen in the upgrader. Each process requires energy which result in significant GHG emissions from the upgrading process. Mining and crushing are electrically powered and do not have direct emissions, while transport, separation and upgrading use natural gas and other fuels. In-situ recovery currently uses hot water and steam to liquefy the bitumen underground. The production of steam and hot water consumes the most energy.

Looking into the future, we modelled what the impact may be of increasing oil sands production to compensate for shrinking conventional reserves along with a significant expansion of natural gas production from LNG exports. We projected that B.C. would produce 82 million tonnes of LNG and that oil sands would continue to grow but at a potentially slower pace due to capacity constraints.  As you can see, unconstrained LNG exports would have a very large effect on emissions unless there were new technology or policy actions used to limit them. Oil sands production and GHG emissions would more than double by 2050 but the drop in conventional production would serve to dampen the total emissions increase from oil production.

This is just a brief sampling of the data we’ve presented in our report to provide a better understanding of the energy and emissions intensity of fossil fuel extraction in Canada. We also corroborated our findings with other leading reports and outlined how technology and policy may be used to ensure the Canadian fossil fuel sector can achieve its GHG reduction targets.

© 2022 The Canadian Academy of Engineering